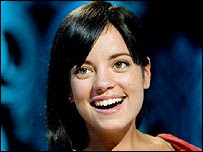 ALLEN: Peter Stringfellow is a nasty man.
LAVERNE: Yeah.
ALLEN: I mean, respect to his trade and what he does.
LAVERNE: What do you mean respect?! Respect to what? Respect to the lapdancing trade? Yeah it’s really important to respect that! Do we?
ALLEN: I like it.
LAVERNE: Do you? Oh my god.
ALLEN: When I signed my record deal I went there.
LAVERNE: Did you? To Stringies?
ALLEN: I got quite into it. [coquettishly] I liked sitting there while they gyrated in front of me.
LAVERNE: I’m sure it’s very nice; they look like very pleasant girls.
ALLEN: Yeah yeah, it was fun, umm [turning to the camera as if to say ‘moving on …’]
LAVERNE: But yet, a little bit sad isn’t it, really? The thing is …
ALLEN: A lot of girls do it to fund their education …
LAVERNE: Nah, do you know what Lily, that’s fucking bollocks, right, cos even if they spend the money on that, it’s one of those things that, it’s one of those lies that blokes try and sell you that, you know: ‘you’ve got the power, cos like, you’re getting the money for it’. Frankly, if you’re being paid to be naked, you’ve not got any power in that dynamic. It’s not a good thing. It’s a bad thing.
ALLEN: [holding up her hands, perhaps realising she sounds slightly ridiculous] But I think it’s a woman’s right to sell herself. If there’s a market for it, why not?
LAVERNE: [magnanimous, but clearly utterly appalled by this stage] Let’s do this on ‘Loose Women’. For now, back to the show …

Now, I should begin by saying that, as far as myself and Lily Allen’s music is concerned, I think it’s mostly not that bad. Or, put differently, while it would be slightly disingenuous of me to say that I have a lot of time for her first record, it might be said that I have something approaching a little bit of not-very-valuable time for it, some of the time.

So, I was initially willing to give Lily a chance. But then strange things started happening. Lily had made a fairly decent, sometimes innovative album that appealed to a wide range of the British listening public. This was pop, but it was the kind of mildly urbane, occasionally trenchant and witty pop the alternative fraternity could appreciate just as readily as could a twelve year-old girl. The music was a neat, hi-fidelity hybrid of The Specials, St Etienne, and The Streets, and underneath the bubblegum sheen there appeared to be a sort of laudable combativeness and belligerence, a hint of marginalised rebellion and feminist vigour which set Lily apart from the Bailey Rae/Melua school of say-nothing mediocrity.

As such, it was confusing when Lily began to behave not so much like an alternative musician, and quite a lot like a first-year graduate intern at Price Waterhouse Cooper. Lily began to make statements like: ‘I just want to make some money. Maybe I could retire at 25. I’m only going to do one more album’, and [see article below] ‘So what if we're middle class? Just 'cos your mum was too lazy to get her fat ass up off the sofa and make some cash. I shouldn't be able to make tunes, yeah?' Apparently, we were told, such comments had to be viewed in light of Lily’s difficult upbringing. Lily’s poor mum had struggled for years to raise Lily and her siblings in the face of innumerable hardships such as having to fork out for her kids’ private education, being the wife/girlfriend of successful commedians Keith Allen and Harry Enfield, and producing multi-million dollar international blockbuster movies. Lily’s cynical, money-minded careerism, we were told, arose from a desire to ensure she herself would never have to return to this world of Dickensian privation.

Soon Lily’s face began to appear with increasing regularity on the cover of lifestyle magazines throughout the land, commenting on yet more aspects of her arduous life: Lily was after all going out with moderately famous Chemical Brother Ed Simons, taking cocaine now and then, and suffering from the bane of having an arse she thought was just that little bit too voluminous. Despite this, Lily became a ‘fashion icon’ and role model for young girls everywhere, a paragon of good style-sense and straight-talking neo-‘girl power’ sensibility.

Then it was announced that Lily was to be become a chat show host. Now, I am quite prepared to admit to being the holder of principles that might strike some as being woefully puritanical and old-fashioned. Nevertheless, it seems to me that hosting a chat show is probably not the sort of thing anyone interested in producing challenging, worthwhile art should be indulging in. Chat shows, surely, are vehicles for people like Terry Wogan and Oprah Winfrey, people with a penchant for suave, inoffensive affability, celebrities adept in the art of entertaining as many disparate people as possible with professional inanity and a studied genial populism.

Yet it seems that, for Lily, there is nothing wrong with trying to be, on one hand, something like a poppier Kate Bush, and on the other, a cooler, ‘feistier’ Davina McCall, nothing incongruous with being a serious musician at the same time as being a flirtatious celebrity style-icon. Presumably, as with most things where Lily is concerned, money provides legitimacy for this indiscriminate willingness to conflate mainstream and anti-establishment characteristics.

The above quoted conversation is a useful case in point. Here we see a young, inordinately rich musician defending the woman’s right to sell herself as a lapdancer, to the total bafflement of another, rather more scrupulous musical figure from a not-so-distant period of history, in which the justification but if there’s a market for it … was not some kind of quasi-postmodernist get-out clause masquerading as a proclamation of self-empowerment, with the potential to excuse all manner of corporate evils.

If Lauren Laverne personifies alternative music past: funny, articulate, principled, politically aware [Laverne, remember, memorably labelled The Spice Girls 'Tory scum' back in 1997] , then Lily Allen epitomises with horrifying exactitude the present state of the musical-cultural landscape: a place in which consumerism, fashion, self-objectifying sexuality and a kind of reactionary Burchillian brattiness have come to define the public persona of a girl who initially promised something a lot smarter and more creative.