AN ASIDE ON A LESSER NEWS STORY OF THE MOMENT 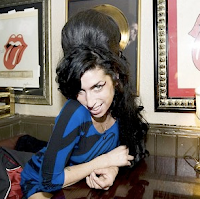 Of course all the usual disclaimers apply (they're bland but they need to be stated): any death is an unspeakable tragedy; this must be a living nightmare for her family; it's shocking that this could happen to someone so young. For myself it feels like this is the first person of my generation to die in an end-of-the-line kind of way; other people of exactly my age have died in accidents, but this was more than an accident, the endpoint of her "natural" trajectory, an accelerated aging process, a wasting away, and as such not really different in essence from the one we're all going to have to face eventually. This was the first "mature death" of a contemporary I've experienced, and it's very sad.

Outside of this human context though, this is another one of those "how did this madness ever take hold?" moments to set beside the reaction to the Murdoch defrocking. Amid all the ill-judged appraisals from online hacks desperately scratching around for something positive to say about the actual music, there's a sense of collective embarrassment that we ever allowed what was essentially a pop-cabaret one-hit-wonder to become an international superstar and sometime figurehead for an entire culture.

Amy Winehouse released one good single in 2006, a song whose extreme formal conservatism was redeemed by a campy yet catchy and ingenious lyrical conceit. This is, quite literally, all she ever did of any worth, as far as I can make out.

The rest of what happened was essentially a meta-narrative that perfectly encapsulates the cultural nadir that was the mid-to-late noughties: consumer hedonism, etiolated post-feminism, unapologetic retrophilia of a scarcely believable magnitude, celebrity culture, an alternately tragic/fairytale myth of individualism, vast shallowness on an epic scale. It's some source of comfort to me that these things don't seem quite as hegemonic now as they did back then. Wait a minute, did someone say "Adele"?
Posted by Alex Niven at 20:53 7 comments:

ENDGAME FOR A COUNTER CULTURE, FRAGMENT 3