THE SPIRIT OF THE AGE

-
In 1996 (just for the hell of it) it was Gina G singing 'Ooh Aah, Just a Little Bit', it was Euro '96, it was Oasis, it was Knebworth, it was Kevin Keegan shouting with petulance but also visceral, wild-eyed ardour at Alex Ferguson for being so cynical and mean-spirited, it was the end of the IRA ceasefire, it was Mission Impossible I, it was the International Year For the Eradication of Poverty, it was the Dunblane massacre, it was Alan Shearer, it was lime-green, it was big-platforms on trainers, it was bright orange, it was the Union Jack looking OK for a fleeting moment, it was the Nintendo 64, it was Bill Clinton signing the Comprehensive Nuclear Test Ban Treaty, it was Tony Blair smiling a Clintonian rather than a Bushian smile that was nevertheless both hopeful and sinister, it was the death of Tupac, it was the film 'Independence Day', it was the publication of Chuck Palanuik's book 'Fight Club', it was David Foster Wallace's 'Infinite Jest', it was Our Friends in the North summing up the spirit of the age, it was Geri Halliwell, it was Dodgy singing 'Good Enough', it was the birth of Dolly the Sheep.

In 2007 it was Kylie coming back and singing '2 Hearts' in a dark, gothically decadent dress, it was Gordon Brown coming to power and saying very little, it was the BBC adaptation of Dickens's 'Oliver Twist', it was Amy Winehouse's drugs, it was the the intense, monochromatic force of the film 'Control', it was Britney Spears losing control with the world watching, it was 'immigration is getting out of control', it was George Bush and Tony Blair in decline, it was Don DeLillo's 'Falling Man', it was The Klaxons, it was Led Zeppelin reforming, it was black, it was 'everything is going wrong / but we're so happy', it was Lily Allen appearing in her (black) lingerie for GQ magazine, it was gold, it was ketamine, it was spidery shadowy lettering, it was Afghanistan, it was Iraq, it was Iran, it was David Lynch's 'Inland Empire', it was the BBC adaptation of 'Cranford', it was Calvin Harris singing that he had love and hugs for people, but only if they were born in the penultimate decade of the twentieth century, it was ostentatious jewellery, it was buckets and buckets of rain, it was Channel 4's T4 Unsigned bands competition, it was Northern Rock imploding, it was the total lunar eclipse in March, it was Nicolas Sarkozy, it was a sad, ineffable absence right in the middle of things with two syllables that said Maddy until nobody knew what it meant anymore.
Posted by Alex Niven at 15:48 No comments:

TEN GAYS THAT SHOOK THE WORLD

-
Pete Doherty (the music of whom is, it seems to me, frequently very good, but even more frequently hugely underwhelming and overrated) has often in interviews touted his admiration for Charles Baudelaire amongst numerous other romantic-outsider literary figures – Blake, De Quincey, Huysman, Camus etc.

There is a fairly evident line of interconnection between Baudelaire and Doherty, the latter having apparently modelled much of his artistic persona on the nineteenth century French writer often characterised as being the first archetypically ‘modern’ poet - modern because of his ironical world-weariness, his focus on urban squalor, and his alienated detachment from the oppressive mores of modern-industrial society, an attitude Doherty has, like many other artists in the last 150 years, updated for a new era in which this kind of romantic-rebel stance still seems apposite.

And, of course, there are the drugs. Baudelaire, famously, was a champion drinker and smoker of weed and opium, even going so far as to publish an article extolling the virtues of the two in 1860 entitled Poètes francais; Les Paradis artificiels: opium et haschisch, or ‘French Poets; Artificial Paradises: Opium and Hashish’. For Baudelaire, in the godless, spiritually vacuous modern world, experimentation with the two substances offered the possibility of an otherwise inaccessible salvation for the dislocated individual. Social and religious paradises might remain unattainably lost, but there was at least hope in reducing matters to a small-scale, radically subjective level where utopia, or at least a fleeting glimpse of what looked like utopia, seems reachable.

The intense idealism of Doherty’s artistic project is very much grounded in this particular Baudelairean view. Paradise for Doherty (often conjured as ‘Arcadia’, or the more place-specific Blakean ‘Albion’) is to be achieved through a visionary discovery of the magical colour underlying the greyness of the modern world, a process quite obviously (and contra Blake) helped along the way by the copious ingestion of mind-altering artificial substances. I can recall (but can’t source anywhere) Doherty talking eloquently about creativity a couple of years ago, evoking it as something like a process of ‘walking down a street and turning a brick in a wall that opens up a whole other world’. This, along with other of Doherty’s more poetic pronouncements, reminds me of lines from probably my favourite poem by Baudelaire - ‘Landscape’ - which depicts a similar (and pretty definitely drug-influenced) dream of a private idyll discovered in an urban setting:

And when the winter comes, in monotone of snow,
I’ll lock up all the doors and shutters neat and tight,
And build a fairy palace for myself at night.
So I will dream of bright horizons in the blue
Where fountains weep in pools of alabaster hue,
Of kisses in the glades, where birds sing night and day,
Of all to make an idyll in a childish way.
Riot, that rages vainly at my window glass,
Will never make me raise my forehead from my task,
Since I am plunged in this voluptuous delight –
Of conjuring the spring with all the poet’s might,
Of hauling forth a sun out of my heart, with care
Transmuting furious thoughts to gently breathing air.

There is much of this lyrical idealism in Doherty’s work, and such articulate vision is to be applauded. At the very least this emphasis on revolutionary individual discovery contrasts favourably with the kind of flippant, say-nothing posturing to be found in a ‘post-Libertines’ non-band such as The View. Getting beyond the squalor of the quotidian and fostering private dreams of escape is, it goes without saying, a necessary precondition for radicalism of all kinds, and, if drugs have the potential to provide assistance in this edifying process, then so be it. We all benefit from constructing imaginative fairy palaces in our heads at one point or another.

There is, however, also surely something dangerous in this casual advocacy of ‘artificial paradises’. I don’t want to misrepresent Baudelaire, as there seems to me a good deal of ambiguity on the subject in his work; the idyll in ‘Landscape’ is, significantly, a ‘childish’ one, and elsewhere, in a poem such as ‘Parisian Dream’, extravagantly lush, hallucinatory descriptions of the cityscape finally give way to the ‘horror’ of the poet-speaker’s ‘wretched hole’ as the vision subsides - there is clearly, as in De Quincey, a substantial acknowledgement of the dark side to the life of the drug addict-visionary running as a recurrent theme throughout Baudelaire’s body of work.

Nevertheless, the notion that a life founded on drug-induced visions might offer some kind of utopian solution is the standpoint that Doherty seems to have adopted as his own latter-day translation of Baudelaire, and it is one that must be fiercely guarded against in a present-day context where hitherto unimaginable levels of excessive drug-use run the risk of derailing any solid cultural opposition to the myriad of social ills confronting us. Drug misuse is in reality not an act of resistance to modern day capitalism, merely a confirmation of the doctrines of extreme individualism and personal choice that enable the system to continue to flourish. Isn’t an ‘artificial paradise’, after all, exactly what consumerism promises us? As such, it comes as no surprise that the most eminently marketable British musicians of today – Doherty, Amy Winehouse, The Klaxons, Lily Allen – are also figures whose liberal uses of chemicals are almost as frequently celebrated as their artistic outputs.

Around about the same time as Baudelaire was writing of artificial paradises, William Morris was advancing his response to a similar perception of the spiritual poverty and general dereliction of the modern world, attempting to point to the possibility of what he termed the ‘earthly paradise’. His affirmative vision of the future was founded not on private escapism, but on the idea that paradise could be regained through collective action – through socialism. Pete Doherty would do well to attend to Morris as much as to Baudelaire, and to take a leaf out of Morris's book in focusing on Arcadia’s earthliness, rather than on its druggy artificiality.
Posted by Alex Niven at 15:48 No comments:

-
Glasgow band Make Model’s new single ‘The Was’ is everything you could want in a twenty-first century alternative rock song - forward-looking melodic guitar music wonderfully free of the ruinous effects of both fashionistic frippery and cliché-driven conservatism.

Hung shimmeringly around a gorgeous harp sample and driven by a neat brass section and a vigorous rhythmic underbelly, ‘The Was’ manages to sound magical and humane without ever plunging the depths of a Belle and Sebastian-like cutesiness. The vocals are virtuously esoteric and un-egotistical, and there is a pervasive sense of a heart-felt communal project underlying the laudably adventurous arrangement.

This is romantic-futuristic folk-rock with one eye on America, but it is also more to the point a marvellous and affirmative indication that British indie might in the near future be able to drag itself out of the commercial, insular pit it currently inhabits.

Such optimism puts me bang in the mood for Christmas.
Posted by Alex Niven at 16:25 No comments: 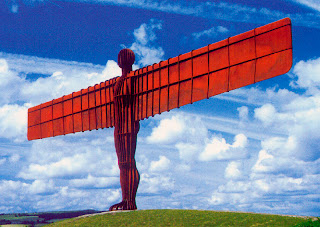 LAURIE ANDERSON SAID: 'I ALWAYS FELT THAT EUROPEANS SAW THE UNITED STATES AS A VERSION OF THEIR OWN FUTURE'

I HEART SMOKEY ROBINSON (HIS LYRICS ARE MINT):

If you feel like giving me
A lifetime of devotion
I second that emotion.

EZRA POUND SAID: 'THE BEAUTY OF ART IS A BRIEF GASP BETWEEN ONE CLICHE AND ANOTHER'