IN WHICH A TOON SUPPORTER SPEAKS FROM THE HEART ('In the gloom, the gold gathers the light against it')

-
I don’t know for sure, and I can never ask them now, but I think I’ve got a fairly good idea as to why my parents chose to settle in the north east of England. They had both spent a fair bit of their formative years in London and the south, but their own parents were originally from Scotland, Ireland, Lancashire, and I think they felt a congenital pull away from the powerful centre of things, felt the need to raise a family somewhere with warmth, with a sense of marginality and distinctiveness, somewhere where community, identity and bloody-minded, out-on-a-limb adventurousness counted for far more than money, superficiality, careerist ambition and a life of comfort.

A hell of a lot of bollocks is talked about class and regionalism in this country, but as far as I’m concerned this is what it comes down to; this sense of feeling like you belong either to the middle or to the fringes, to the inside or to the outside, and one thing that growing up in the north east made sure of was that I had wired into my marrow a proud sense of being on the outside looking in. Even if my particular corner of Northumberland was relatively affluent (though in a complicated, variegated, very un-Archers, peculiarly bleak northern way that I don’t really have the space to go into here) the important thing was that it wasn’t London, wasn’t the Home Counties, wasn’t close to the heart of the establishment, the epicentre of taste and influence, the focal point for the bullshit-ephemeral exigencies of fashion and celebrity and self-interest and everything else that puts formidable obstacles in the way of worthwhile existence and worthwhile art.

Growing up in a marginal place (and this could be Newcastle, Manchester, Glasgow, North Wales, Wyoming, Warsaw, or wherever) gives you time and space to develop independently of metropolitan trends and hype and soulless session-musician-style shallowness, to be original and to dream of producing works of permanence and profundity during long hours of exclusion and silence. It means that music is likely to amount to something like an ineffable, quasi-religious means of salvation and escape, emphatically not just another expression of the sort of egotism and luvvie-dom of the entertainment industry and the London media that says that music is only really differentiated from journalism or acting, modelling or TV presenting in the slightest, most arbitrary way.

Attempts to deny or to play-down the kind of difference and distinctiveness I’m talking about are often of the ill-thought out, liberal humanist, naively rationalistic ‘everyone is the same everywhere’ variety, and invariably come from the vantage point of the centre (ie. those benefitting from the power dynamic, and therefore consciously or unconsciously intent on preserving its invisibility).

In the media coverage of the weekend’s football events there has been plenty of this, plenty of cheap, cynical pot-shots at the irrelevancy and insignificance of the ‘passion’ and ‘soul’ of the Toon supporters in the face of the harsh practicality of a relegation fight, plenty of petty sensationalist shadenfreude at the thought of Newcastle getting their ‘come-uppance’, plenty of scoffing at the notion of NUFC being regarded as a ‘great club’ when there has been no silverware in 40 years, quite aside from the fact of the unremitting gutless awfulness of the team’s performance this season.

But let it be stated once and for all: Newcastle United is a great club (and I’m not using the word ‘great’ in the lazily hyperbolic manner that seems to have become de rigeur throughout the culture in the past decade (cf. Auden – ‘the language of size’)). They are a great club because all the things I said above about the north east apply equally, and in a peculiarly pronounced way, to the football team; because in its hard-boiled, spiritual essence (shorn of all the apathy, greed and selfishness of the board and the vast majority of the squad) the club epitomises with a wonderful exactitude all the marginalised pride and heroic, suffering-surmounting spirit of an entire region.

This is not blind sentimentality or romantic bluster, but a profound statement of fact based on experience. It has been a formative empirical observation for me over the past few years that things do tend to dissipate and to mean less the closer you get to the nodes of power and money and ‘success’. This is not necessarily an inherently geographical issue, but, because of the way British history has happened to pan out over the last 1000 years, geography has become an unequivocally significant factor, and the north east has become something like an antithesis of all the callousness and avarice you find congregated in London as a result of it being, firstly, the centre of British Imperialism, and subsequently, one of the 3 or 4 major centres of the new imperium that is American-led neo-liberal consumer capitalism. The fact is that, through being at a requisite distance from all this, the north of England, and particularly the north east, has managed to retain some sense of radicalism and some sense of the importance and depth of meaning that arises out of marginalisation. The powerful inclination towards belief and towards irrational hope that comes hand in hand with pain, with failure and with existing at arms length from a dehumanising establishment is something I try to draw on in everything I do with my band Everything Everything. It is also part of the reason why, despite all the harsh reality of the situation this weekend, and despite all the cynicism and sardonic adolescent noise you will hear about us in the national press, Newcastle United will always be the greatest club in the world. 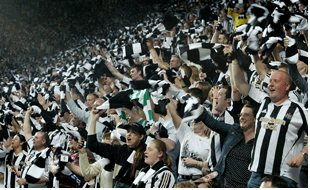 -
... is irresistibly good. There may be a thick vein of middle-brow Strokesiness running through (absolutely sensationally-titled) Wolfgang Amadeus Phoenix, but this is a churlish and minor grumble.

Anyhow, stripped of the blazers, the inclination towards retrograde pastiche, and the faint suggestions of nepotism, those Strokes were, at their best, a pretty unequivocally wonderful formalist pop band, weren't they?

Can't quite get rid of the stink of that invidious decade-despoiling legacy, though ...

But Phoenix: sweet.
Posted by Alex Niven at 21:49 No comments: