MARGARET ON THE GUILLOTINE

-
Apparently many people are gearing-up for the supposedly imminent passing into the night of Margaret Thatcher, preparing to throw ‘Thatcher Death Parties’ as soon as the good news filters through.

Just to forestall what will inevitably be a media frenzy of fairly above-average proportions, I’d just like to offer my twopenny’s worth in rebuttal of the likely suggestion that such festivities might be interpreted as in some way inhumane.

I’m relatively young and have never met Margaret, but on TV, and in books and newspapers etc she has always struck me as, on a personal level, a completely fucking shit human being, not at all one of those people of whom it is possible to say ‘I’m sure she’s a nice person, but …’, and an emphatic riposte to the popular notion that ‘there’s a little bit of good in everyone’.

As with all public figure deaths/births/marriages, our reaction to the event of Thatcher’s death will be less a reflection on the individual than a reaction to what she as a socio-cultural shibboleth represented, which might be summarised as follows: authoritarianism, militarism, greed, social heartlessness, radical egotistic individualism, the end of the welfare state, privatisation, aggressive consumer capitalism, untrammelled economic avarice, anti-union bullying, homophobia, jingoism, racism, divisive England/South-centric majority-rule politics, anti-intellectualism, horrible nasal atonal upper-class speech, snobbery, elitism, bad taste, malign traditionalism, shoddy creative standards, sententious quasi-Churchillian rhetoric, emotional callousness: basically, a cornucopia of everything that is shit in life.

For many people, the death of this woman will represent something like a final, belated divine retribution, and reminder that the unequivocally evil cannot prosper indefinitely. It will also offer a chance for a celebratory declaration that the above values are categorically and unambiguously things that must always, always be vehemently opposed.

Thatcher ruined countless lives in Britain through her political actions, and had a hand in some even more appalling misdeeds elsewhere, in the Falklands and Northern Ireland, and through her tacit support for South African apartheid and such one-dimensionally murderous villains as fascist Chilean dictator Augusto Pinochet. Rejoicing over her final demise will be a chance to make up in some small, exuberant way for all the myriad violence, death, and unscrupulous uncompassionate political nastiness she visited on the world throughout the course of her undeservedly long, comfortable life.

The truly humane thing to do. 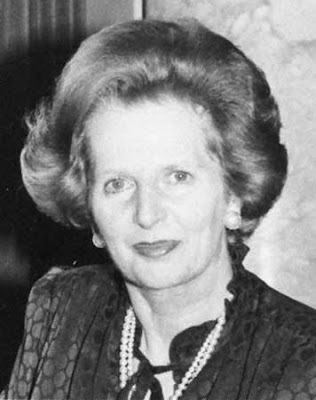