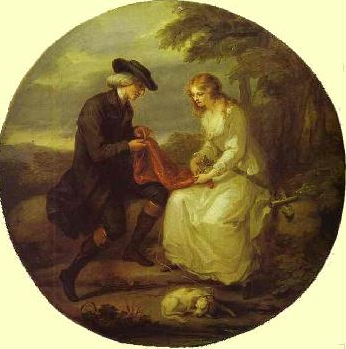 Reading Sterne's Sentimental Journey, I'm struck by how much its ethical guidebook for the haute bourgeoisie resembles our own RaceSexualityGender doxa. In both cases, morality is abstracted - and pseudo-systematised - through a series of jargon terms for the initiated. Whereas we have PoC, intersectionality, trigger warning, mansplaining, brocialism, the eighteenth century had sentiment, sensibility, nature, decorum, sympathy, etc.

In both cases, ethics becomes a kind of manneristic exercise to be perfected if one is to acquire maturity and attain the degree of cultivation required for social advancement (in the eighteenth century - the church, the court, the judiciary, the army; in our own time - academia, politics, the commentariat, and indeed any profession - ie. the vast majority - in which social liberalism is preached while the most punitive form of neoliberal economics is practiced).

The weakness of both systems is their largely performative aspect - using the appropriate terminology and adopting the correct standpoint today with regard to, say, sexuality, is precisely equivalent to eighteenth-century displays of sensibility (the gentleman doffing his cap or handing the young lady his handkerchief at exactly the right moment). The point is that these are what we might call courtly gestures - largely superficial acts of performance that attract applause and approbation in the short term and in the social foreground but do not extend substantially into the realm of actual social organisation. Indeed, in most cases, the former actively stands in for the latter.
Posted by Alex Niven at 09:56