THE FEUDALISM OF THE PREMIER LEAGUE 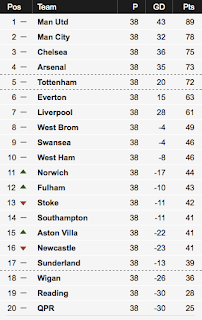 In this season's Premier League the margin between 7th and 8th (12 points) was almost the same as the gap between 8th and the relegation zone (13 points).

The two money/power bases are London and Cheshire.

Everyone else is a relegation candidate.

There's a double-meaning in this.
Posted by Alex Niven at 10:09