THE POLITICAL DIMENSION OF SENTIMENTALITY

Great post by Peter Fanning over at the NUST blog, which summarises a whole lot of straightforward righteousness. No matter how many times I read that Bobby Robson quotation, it never seems hackneyed. It's the political dimension of sentimentality, innit, like I was saying about that Del Amitri tune earlier this year.

Speaking of which, I finally finished reading Ruskin's Praeterita the other day, which has an interesting section towards the end about Carlyle and Scottish art:


... the whole tone of Scottish temper, ballad poetry, and music, which no other school has ever been able to imitate, has arisen out of the sad associations which, one by one, have gathered round every loveliest scene in the border land. Nor is there anything among other beautiful nations to approach the dignity of a true Scotswoman's face, in the tried perfectness of her old age.

Okay, so maybe this is sentimental, gloopy Victorianism, especially the last sentence. But it nails Del Amitri!

By the way, I wouldn't recommend Praeterita. Lots of picturesque descriptions of the Alps and absolutely no proto-socialism. Having said that, in my edition there was a pretty good preface by Kenneth Clark, which I read at the end (so's not to spoil the story, y'kna); Clark points out that Praeterita was essentially a work of consolation written in the wake of Ruskin's political disappointments. The pathos of this went a long way to redeeming the book's escapism. But still, I would go for the critical, political stuff instead, if you're that way inclined. 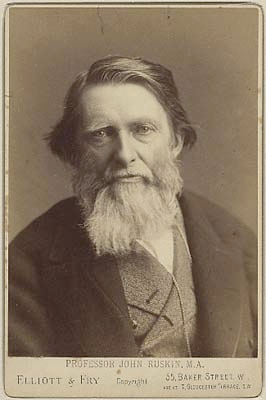