'A RECORD WITH NO WORDS, ONLY SIGHS' 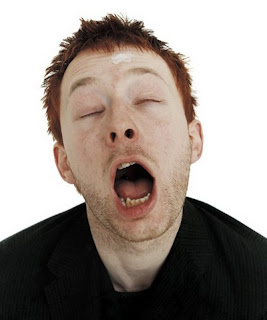 Aside from the fact that this is, from a certain viewpoint, a remarkably poetic and lovely evocation of a relatively mediocre tune, Moyles also picks up on an issue that I've been mulling over for some time, namely: that Radiohead's great tragic flaw consists in the perennial non-rythmic amorphousness of Thom Yorke's vocal phrasing.

Listen to any given 'Head tune with this fact in mind and I promise you the nagging question that has been gnawing away at your musical psyche for years ('I adore my Radiohead, but why can't I truly love him?') will be instantaneously demystified.

When Mr Yorke does bother to inject a bit of gumption into his writing for voice (bits of 'Paranoid Android', 'The Bends', 'Just', 'Ideoteque', the much-underrated 'Wolf at the Door') the results are nearly always gratifyingly good, so I really don't understand why he spends so much time failing to rise above his default ethereal sigh (top marks for this on a purely melodic level, but a good songwriter really must be consistently hitting the bullseye on both targets - melodic and rhythmic).

Anyway, all of this merely serves to confirm my longstanding suspicion that Chris Moyles is the modern-day Samuel Johnson.