One very positive thing about 2011 was an absence of guitars right across the board. Until some profound structural upheaval changes pop music in ways we can’t now apprehend, there is nothing interesting to be done with the guitar whatsoever. We’ve gone way, way beyond that point.
Encouragingly, the pop world seems to have finally reached a broad-based consensus about this, after a dystopian phase in the mid-to-late noughties, which now, with the benefit of hindsight, seems like the final Wagnerian climacteric of a horrible dying animal.
That said, I do quite like Wild Beasts (a guitar band), partly for reasons outlined here. I spent most of this year revisiting their peerless debut album, but Smother had a handful of magic moments on it, notably this gorgeous, guitar-free microcosm, which was also a nice showcase for the peppery vocal tones of my fave Beast, bassist Tom Fleming.

Okay okay, this is all getting a bit Pitchfork, I know. But the whole point of these things is to try to delineate the obvious/canonical, right? Better that than some narcissistic, point-scoring litany of obscurities.

Glass Jar is eleven and a half minutes of exciting, dramatic, variegated music. It’s innovative in an organic, unassuming way. There are continual surprises in the arrangement as it builds towards a rainbow-burst climax.

It’s hipster-tastic but who gives a shit? Hipsters are people too! Glass Jar is beautiful and yearning and puts you in mind of what the spirit-level mainstream of independent music might’ve sounded like if Britpop and nu-rock had never happened. I suppose, actually, that’s what I’m trying get at with all of this carping shite.

As Linton Kwesi Johnson once put it, “Inglan is a bitch, dere’s no escapin it”. Yet ironically, in a terrible year of revived jingoism and pernicious Tory cultural ascendancy, I was finally able to admit to myself that I am, if not English, then at least some kind of British.

Spending a bit of time in the States, the good aspects of the UK finally became blindingly apparent: The North. Football. The Beeb. Dickens. The thousands of churches. History. The Socialist heritage. Cities where the buildings are in close proximity to each other and feel like they’ve been collectively organised. The NHS. A basic atmosphere of interconnectedness. Full measure pints. Blake. Shane Meadows. Carl Neville. Activism. The Beatles. Immigrants. Accents. Moors. Stones. Mountains. The Sea.

Let England Shake seemed to fit with this personal context. But more importantly it also seemed widely resonant and of-the-moment in a way that few popular artworks manage to be. The “Englishness” trend reached an apogee this year, so it was good that one of its chief mainstream representatives was an album that used eloquent poetry and killer tunes to speak of English insurrection and unrest rather than pastoral cliché. Even Geoffrey Hill was “not entirely displeased”.

***
7. SBTRKT - Heatwave
My disappointment in the James Blake album was and is unrelenting. I know there are some astonishing sonic moments on it, but I just cannot countenance THAT FUCKING YELPY FUCKING FAUX-COLLOQUIAL EMO VOICE.

Lots of the tunes on the SBTRKT album suffer from the same blight: hackneyed melodramatic vocal lines slapped on top of otherwise superlative post-dubstep pop. Fortunately the female vocalists just about save the day (cf. Pharoahs, Wildfire).

Then there’s the scintillating (instrumental) opening track. It’s difficult to feel too sceptical about the future of British music after hearing tunes like this. The beating heart of a popular avant-garde is still there, it just needs a bit of massaging.

***
6. Rustie - Hover Traps
I’m not sure about this “maximalism”. Clearly it has some application as a way of describing a broad shift away from the minimal, but the idea that arrangements have become progressively denser because of home recording techniques doesn’t really fit with the actual texture of the music. That argument would be much better applied to, say, Animal Collective, wouldn’t it?

Take this Rustie tune. There are only about 4 or 5 main instrumental parts playing at any one time, and there’s a good deal of negative space in the rhythmic arrangement (note the remarkably funky syncopation of the hook, which relies on multiple tiny rhythmic silences for its effect).

How about this: the maximal trend, if it exists, is a question of intensity rather than density. By this I mean that an artist like Rustie is relying on “massive”, impassioned hooks, accelerated time signatures and dynamic contrasts rather than dense wall-of-sound layering. It’s not so much technologically-induced franticity as good old-fashioned Scottish Romanticism (Hegelian hugeness ... Bonkers-meets-Braveheart ...).
***
5. M83 - Midnight City
If I was being strictly faithful to the pop gods, this would be my number one. Out of all the tunes here, this is the one with the most exuberant, ecstatic, instantly graspable hook, the tune that most pleases the heart rather than the head, the tune least reducible to discursive analysis. Talk about maximal intensity!

But then, as a cultural phenomenon, M83 has become very fucking annoying hasn’t he? The voice is getting yelpier, the music cokier, the hipster fanbase more and more irksome. And the verses in Midnight City don’t really exist do they?

There’s also the fact that it became a kind of signature tune for Made in Chelsea. Have you ever seen Made in Chelsea? I saw one episode a few weeks ago and haven’t quite recovered enough yet to be able to talk about the experience intelligently. I’m serious. It was really shocking.
***
4. Nicki Minaj - Super Bass, Moment 4 Life
Geoffrey Hill on Pieter Brueghel the Elder’s painting Dulle Griet (“Mad Meg”), in the third Oxford Professor of Poetry lecture, May 2011:

“The head is thrust forward, the toothless mouth open, and there is a mad stare in the left eye looking straight ahead at nothing.” I would be very much happier about the condition of poetry in English in the first and second decades of this century if I could look at a poem or a book of poems by one or more contemporaries and say [the above] of them …There needs to be, I would hazard, more especially at the present time, a Dulle Griet element in any work that attracts concentrated attention. And I very much regret that the role of Mad Meg seems to have devolved upon me in my thrice-yearly appearances on this platform. Among the current wave of stand-up comedians and rap musicians, there may be someone capable of taking on the role of Mad Meg … 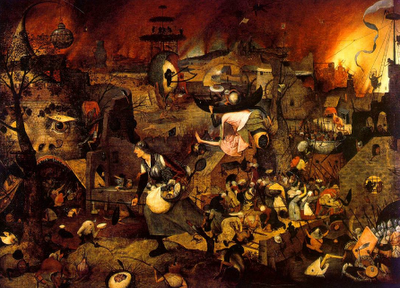 ***
3. Drake - Crew Love
Drake’s Take Care was the album of the year. Consistently listenable, frequently funny, and disarmingly sad in the best possible sense, this was a record of tragic scope and wondrous sonic variety.

James Skewered Seal Blake was apparently a major influence production-wise, but surely Burial would be a better point of comparison. Listen to the glacial melancholy of the segue from Marvin’s Room into Buried Alive (natch) for an illustration.

Crew Love seemed to irritate some people but for me it’s the keystone of the album. There’s such a fantastically uncanny disconnect between the platitudinous machismo of the lyrics and the profound bleakness of the music. Ostensibly this is a song about male solidarity, but the attempt to avow fellowship and soulfulness is everywhere undermined by the surrounding framework, so that, for example, the line “And really I think I like who I’m becoming” seems to suggest the exact opposite. Desperate pathos drips from every dark aperture of this guy’s lyrical universe:

Remarkable.
***
2. Destroyer - Kaputt
Okay, so this year Retromania finally exposed The Real of the twenty-first century zeitgeist (namely, that pop long ago ate itself and is now some way into the post-prandial nap, having taken a fistful of valiums before nodding off). All that was required was for someone to actually come out and say it, Khrushchev-style. Now someone has done this definitely, we can all, y’know, move on.

I had planned to write a long pretentious essay about Destroyer and the final dissipated twilight hours of pop, but after the catharsis provided by Mr Reynolds’s book, coupled with all the other encouraging political irruptions of this year, I’m actually feeling a lot more positive about things generally.

In sum, I don’t actually feel like pop music is kaputt any more. There are plenty of embryonic signs of life roundabout, and now it looks there’s a good chance we might imminently have a revived counterculture to give the whole thing some meaning again. Still: “Sounds, Smash Hits, Melody Maker, NME, all sounds like a dream to me”. Dan Bejar you are a very clever man.

***
1. Rihanna - We Found Love ft. Calvin Harris
We found our love in a hopeless place: the essence of the pop song in eight perfectly chosen words.
Posted by Alex Niven at 16:53

'the maximal trend, if it exists, is a question of intensity rather than density'

Density doesn't work well over an i-pod, and people tend to download tracks that have hooks rather than slow-burning buildup-up tracks, so less layered, more intense tracks are hardwired for the medium. Everything a hook, every verse a chorus.

Eventually there may will be a counter-movement of dense live-improv stuff that isn't about button-pushing, based on vague stuff from the past. More fun for the participants rather than the punters.

Sean - that makes perfect sense to me. It's weird the way ipods eliminate stuff: basslines have to me titanically hypertrophied before people will even notice they're there.

And cheers for the kind words about the book!