THE DAY I MET MY HERO 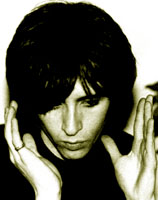 I get off the Overground at South Hampstead and it immediately starts pissing it down. I’m slightly late so I think about running, but I’ve got three layers on – a lot for an unreconstructed Northumbrian – and I don’t want to be sweaty and florid for the big man.
Predictably, when I get to Abbey Road, I’m the first one there. Catriona the Warner PR lass meets me after a short while in the reception. She’s clearly a bit music-biz, a bit ersatz, but frankly, because of her base of friendliness and the fact that she’s not a 40+ man, she will seem more and more like a paragon of human decency as the next hour unfolds. The next person I’m introduced to, I’m never quite sure who he is. He could be the head of Warner, he could be the producer of the album, he could be the studio owner or Johnny’s manager. It doesn’t matter much. Because he looks and is dressed very similarly to Bill Nighy (Bill Nighy in, well, anything), I’m going to call him Bill, which is almost unquestionably not his name. Bill is in his forties, is wearing an expensive black suit with a black shirt underneath, and has one of those Stones-y haircuts which make me thank Sir Mick of Jagger I don’t live in Manchester any more.
We head up to a small room on the second floor. When I daydream of Abbey Road, I think of the stock stuff: the Summer of Love, visions of the Beatles bursting into immaculate 3-part harmonies at the pinnacle of the twentieth century, Ringo eating a Chinese takeaway in the corner, that sort of thing. This room, however, looks like a basement in a sixth-form college in Stoke [no offence, Ms. Weston]. It must be less than 15 feet wide and 7 or 8 feet deep. There appears to be some sort of Blur box-set on a shelf on one side of the room (like, ew), and on the other is one of those tacky posterboard things, you know, the ones you buy from the pound shop that usually have a fuzzy picture of Al Pacino in Scarface on the front. This one has a picture of The Smiths on it, along with the words “The Smiths” in comic sans. (Only joking about the comic sans, but you get the idea.)
I ask Bill if I can record the interview, like The Quietus has asked me to.
“Oh no. This isn’t an interview you know”.
“Ah. What is it then?”
“It’s just a chance to listen to some tracks from Johnny’s new album and hang out with him!” Catriona says, with bubbles.
“Ah. No problem”. Follows an awkward pause.
“Sit anywhere you like,” Bill says finally. “The other journalists should be here soon, and Johnny’s just having a spot of lunch.” Which other journalists? I think to myself. What is this?
I decide to sit in the chair in the corner.
“Don't sit in that chair! That’s my chair. Sit anywhere, except there.” I literally laugh at Bill when he says this, but he doesn’t laugh back.

The other music journalists arrive about twenty minutes late, conspicuously dry after their taxi journeys from central London. Roger Fluellen Johnson from The Observer is in his forties, is wearing a trendy suit, and has one of those Stones-y haircuts too. Mike Thompson from Mojo is in his forties, is wearing an expensive suit, and has one of those Stones-y … you get the picture. Johnny arrives and he looks exactly like all the other guys, I’m afraid to say. Is this the man who wrote “Please Please Please (Let Me Get What I Want)”? I find it difficult to countenance the idea.
Over the next half hour we are treated to seven songs played at ear-splitting volume from the forthcoming album, which nobody outside the room has heard before. Apparently the record company people were blown away when they first heard these works-in-progress, and thought: we really have to play these to other people. It seem that that’s where the idea for this “thing” came from (no-one else seems to know what it is either) – we just really wanted to share these songs. I find it interesting that the “other people” they want to share the tracks with just so happen to be representatives of the major music press publications (plus, inexplicably, me), but I keep my mouth shut.
The seven songs are, without exception, unutterably lifeless, detumescent dad rock. The third one is, I suppose, not that bad. It could almost be by Wild Nothing or Real Estate (ie. bands who sound a bit like The Smiths in a decorative, 2012-hipster sort of way). But the rest is unequivocally awful, like Oasis but much, much worse, replete with lyrics like “I wanna leave town” and “lookin’ through my eyes now” and “wakin’ up in the sun now” (it’s always a bad sign when lyricists put “now” at the end of a line just to fill out the scansion).
At the end of the seventh song, Bill leans over to the mixing desk, and theatrically turns the volume knob right down, to signal the end of the performance. We clap enthusiastically (even me - hell, what can a brother do?). Follows a long discourse from Johnny and the record company people about where the record “came from”, which is so heartbreakingly boring I won’t recount it.
The assembled journos each take turns to say very bland, positive stuff about the songs. At one point Mike Thompson from Mojo pipes up, “It’s almost Smithsy, in parts.” The faces of the record company people fall flat. This is not the right thing to say, it seems.
Bill interjects: “Hmm, yeah, we thought that at first. But then we thought, actually, it’s not so much Smithsy as … Johnny. It’s actually just Johnny.” Everyone murmurs eager assent, and the conversation is wrapped up. We get our coats and pile out of Abbey Road.
“Goodbye Alex. Take care now”, says Johnny, as I head down the steps and out onto the waterlogged street.

Just how did this happen? The last thing anyone predicted was that 2012 would be dominated neither by an expansion of Occupy nor a resurgence of right-wing populism. Instead we have a government that is doing exactly the same thing British governments have done for the last 30 years, ie. moderately strengthening and deepening neoliberal expansion. I don't care if Labour get in next time around, they show absolutely no sign that they'd do anything other than very cautiously modify the right-of-centre agenda; I mean, I seriously doubt whether wondercunts like Balls and the MilliPods would even have the fucking guts to roll back Osborne's latest attempt to play Battleships with the human rights of the populace with this "shares for rights" fucking travesty. What a fucking fucking bunch of fucking cunts.

But seeing as this is The Fantastic Hope an all (although in this instance The Barely Excusable Escapism is far more accurate) ...

I was saved from a total nervous collapse yesterday by getting properly acquainted with the new Nas album, moments of which are so astonishingly accomplished and vital, it literally made the hairs on the back of my neck bristle.

Her father
the widowed
Mr. Withers
was in town
visiting his
umquwhile
clientage
on carboniferous
business.

While
he wandered
on the coal wharves
we disputed
the relative merits
of painting
and music.

I wrote an essay
nine foolscap
pages long
dedicated to the
total overthrow
and discomfiture
of her opinions
and the establishment
of mine.

She wasn’t pretty,
rather, pleasant
in a wild-flower
sort of way,
especially if her
eyes were
looking at you,
and her mind
with them.

I said
goodbye
to this fragile,
freckled, fair,
sensitive
slip of a girl
on Camberwell Green
in the Spring of ’38.

A short
while later
her father
“negotiated” her
marriage
to a Newcastle
coal merchant,
who treated her
pretty much
as one of his
coal sacks
and she died
within a year.